Due to the great success of this exhibition, we have decided to give everyone a last chance to visit Great Tokyo: One Hundred Views by Koizumi Kishio  The exhibition will be open to visitors on Friday 20 and Saturday 21 March, 12.00 – 17.00 hrs.

Nihon no hanga will be showing the entire series of One hundred pictures of Great Tokyo in the Shōwa era by Koizumi Kishio (1893-1945). Various prints from the series have played important roles in our past exhibitions, but only a number of the entire set have been shown to the public. Nihon no hanga will be the first museum to showcase a complete set of the series released by the artist himself in 1940. 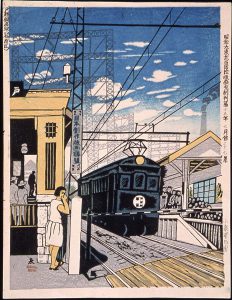 Koizumi Kishio was a creative print (sōsaku hanga) artist who was dedicated to the complete self-production of his prints. One of his greatest ambitions was to create a series of one hundred views of Tokyo. He was inspired by great woodblock print artists such as Katsushika Hokusai (1760-1849) and Utagawa Hiroshige (1797-1858), who both devoted series to the city – then known as Edo. During the course of Kishio’s project, Tokyo changed significantly. Through the city’s hardships of the Great Kantō Earthquake of 1923, and the following period of immense urban upheaval, Kishio continued to find inspiration for his woodblock prints in the ever-changing metropolis of Great Tokyo. From the first print in October 1928 to the hundredth design of December 1937, Kishio worked diligently on what he called his life’s work. Through one hundred views, the exhibition will explore Kishio’s personal interpretation of the reconstructed visual identity of Tokyo, as well as highlighting the intriguing story behind the making of the series.no hanga will be the first museum to showcase a complete set of the series released by the artist himself in 1940.

The accompanying exhibition guide (in English) contains an in-depth essay on the creation of the One hundred pictures of Great Tokyo in the Shōwa era series, and illustrates all 100 prints from Nihon no hanga’s complete set. It will be available for purchase on 1 November for € 7,50 Euro.