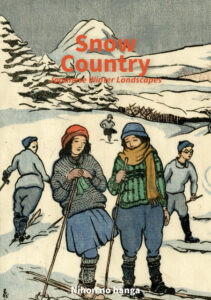 Our latest exhibition will focus on wintery landscape prints of the 20th century. In Japan snow has been a source of inspiration in art and literature for centuries. Poetic scenes of snowy cityscapes and serene winter beauties have been a well-known part of the Japanese woodblock print tradition but were also a beloved theme in modern shin and sōsaku hanga.

However, living with vast amounts of snow in the remote ‘snow country’, or yukiguni, came with certain challenges. Printmakers from these areas have earnestly depicted daily life in this somewhat concealed part of Japan. When snow country became more accessible with the advent of modern transportation links its representation changed. Seeking out snow leisure became a fashionable pastime for urbanites, including prolific writers and prints artists.

The various aspects of snow surrounding the city, countryside, and its people take centre stage in Snow Country: Japanese Winter Landscapes, with over one hundred works from our collection.
Free entrance, ticket only required for guided tour