The Leiden Lecture Series in Japanese Studies will be back for its first lecture this term to explore the history of whaling, a controversial practice Japan still upholds today. Join us on March 16, 5 pm on Zoom for a talk by Jakobina Arch (Whitman College) to find out more about the cultural roots of whaling. 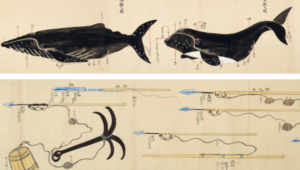 Whaling in Japan today is a highly political issue, entangled in questions of global diplomacy and international influence on national culture. Outside observers have been surprised at how persistent the government support for whaling has been in the face of increasing disapproval since the rise of the environmental movement in the 1970s, but whaling has always been entangled with politics. Even going back to the nineteenth century, when foreign ships increasingly pushed to be allowed to trade with Japan, whaling was part of considerations of how to defend Japanese sovereignty and eventually to expand their imperial territory in competition with other global powers. At the same time, coastal whaling groups began to metamorphose into modern whaling corporations pursuing their prey within what would become Japan’s colonial waters. Of course, whaling was only one of the tools of Japanese expansion, whether for the Tokugawa shogunate or for the Meiji government. But the Japanese quickly recognized the political possibilities offered by whaling, from efforts supported by the Tokugawa shogunate to new plans made under the Meiji government leveraging the possibilities of territorial claims offered by the presence of whalers in far-flung areas of the sea. This talk considers how the originally local enterprise of coastal whaling became part of Japanese colonial politics and the globally complex construction of ideas of territory as related to maritime space. In the process, it highlights the importance of the connection between whalers, whaling grounds, and ocean-based imperial expansion in and around Japan as major factors driving the development of Japan’s pelagic empire, with consequences still felt in the decisions about whaling today.
The Leiden Lecture Series in Japanese Studies is generously funded by the Ailion Fund.